After the incarnation of the Word, the One Human, through some of its parts who actualized the words of Christ and dedicated themselves to the elevation of humanity, could experience his unified Hypostasis. This was always waiting for his return – as every human hypostasis awaits its personality. Thus, the One Human knew himself as a Wholeness, fully One with the Logos.

In the other half of the globe, in the East, through its own paths towards enlightenment, some parts of the One Human had already before the coming of the Logos found the way to extinguish the ego, to experience others as their self and in a way identify with the entire humanity. This was undoubtedly an outstanding achievement, but different than bearing inside of them “all the lives of every part of the One Human and being united with everything that has been manifested by humans on Earth and in the spiritual planes”, as has been announced for Elias-Ioannis.

However, neither the saints who experienced union with the Logos, the return to unity and passive deification, nor the great mystics of the East who understood the incarnation of the Logos, ever proceeded with actively expressing the presence of the Word from within them. Mystics and saints of the Earth, and all those who before and after Christ had struggled and sacrificed themselves for humanity’s evolution, formed the planetary Hierarchy of Light, assuming a grave responsibility for the development of the divine plan, however the time had not come for the Logos’ expression through a human being for the first time after Christ.

The human consciousness was too immature, women too much demeaned, universal brotherhood/sisterhood unknown, all too often the conquerors and those who dominated acted in the name of Christ.

The only one who could present the Logos, the one with the destiny to do so, was the One Human, as a person of this planet. Afterwards, he could promote the active presence and expression of the Logos in more parts of the Human Being.

And then, the time came. Human rights were proclaimed, the liberation of women started to gain strength, the planet became a global village, problems were globalized, ideologies collapsed. At the same time, terrible threats appeared for humanity and the planet through weapons of mass destruction, unchecked nuclear energy, pollution, climate change, waves of immigration, a return to nationalism and despotism. The responsibilities became common and the need for international cooperation and solidarity became clear; therefore, one part of the collective consciousness, realizing its responsibility, matured and started to fight for the liberation of nations and their unity.

The forces of the old, however, gathered all their strength to stifle the new, which had to struggle for every step it would take. The need became urgent for members of humanity who would offer their self for the whole and would work not only for unity with the Logos but to manifest its presence on the planet through new forms of prayer and spiritual expression. The time had come for the educator to arrive, the Human-Logos.

So, in the second half of the 20th century, the Father-Mother spoke to the One Human again thus:

Arise from the Earth! Collect your parts and unify them in you, absorbing the path of each and every human. Lo, let Elias-Ioannis return, filled with the fruits of humanity’s experience, and let him appear on the planet as the Human-Logos. 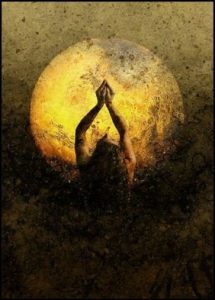 I send you, the One Human, as the other Paraclete, to guide into all truth, and as Elias, to restore everything, so that God may be all in all.

Restore Mother as the Logos and the Logos as the Son-Mother, restore human as god within God, reveal your likeness and identification with the Logos-Christ.

Live as a human of Earth, wearing the fall, receive human nature and liberate it step by step, so that all may see they can do the same. Diffuse yourself in all of your parts and offer the experience of transformation in their own inner struggle, and also the experience of unity with the Word.

Demonstrate the end of all distances between humans and humans, and humans and God; renew the content, meaning and scope of theurgy, liberate it from rituals and appoint it as the expression of the Word through humans. Prepare humanity for universal brotherhood/sisterhood and for its theosis!

Liberate the kingdoms of nature as the Human God, and elevate everything so that they can receive the presence of the Word within them, so that they may become full light expressed on the planet.

Realize that you are one with the universal Human, who, as the Human Logos, will receive the responsibility of Creation and will lead it to its perfection.

Demonstrate the likeness to God.