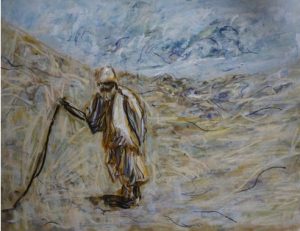 How beautifully did people speak throughout the centuries, those who fell in love with the One Being, the One Life behind all forms and, erasing their ego, allowed this Life to live within them. This is, for instance, illustrated in this comment regarding the order that was founded in Tibet by the great yogi Milarepa:

Having died completely the death of his own egoism
and of his belief in his individuality
separate from others,
the yogi can say:
Because I no longer am,
I am everybody, I am everything.

These people saw every separation in them crumble, they saw every distance which they had set between themselves and God, the Cosmos and others disappear, and they rediscovered their self in its real condition, as love and sacrifice, as beauty and freedom, as grandeur and humility, and as a ceaseless yearning to offer – and thus they became the servants of humanity:

In reality, of course,
we are all cells in the body of humanity.
We are not separate from our fellow humans.
The whole thing is a totality.
(…) I recognize my oneness with all mankind
and my oneness with God.
My happiness overflows in loving
and giving toward everyone and everything.
(Peace Pilgrim – 1908-1981)

How does their voice resound from the depths of time, that same single voice, regardless of the religion or spirituality from which it originated, that voice which confirms that the human being can experience the unity of everything as its own true Self only be loving and serving…

What the whole world is expecting today
(…) is the magnificent idea of the spiritual unity of the universe,
the only and infinite reality that exists in you,
inside me, inside all of us, in the Soul…
The infinite unity of the Soul,
the idea that you and me are not only brothers,
but that you and me are one…
If you want to find God, serve humans!
(…) even if I have to undergo a thousand births
to relieve the misery of the world,
aye, even to remove the least pain from anyone,
I shall cheerfully do it!

How concrete was their understanding that their ascendance to Being, to the Absolute One, took place so that they could become humanity’s servants, as we read here (in Greek) about the Sufi whirling dervishes, the order founded by Jalāl ad-Dīn Rūmī:

This ritual dance represents
a mystic journey of ascendance
towards the Absolute One,
in which the practitioner
is symbolically whirling towards the truth,
is developing through love
and abandons the ego,
discovers the truth, reaches the Absolute,
and when he returns from this spiritual journey
having conquered the maturity and the strength to love,
dedicates himself to the service of all creation,
regardless of opinions, races, classes or nations.

The centuries flowed and the Being was incarnated, and thus we got to know the Logos in human flesh. The relationship between the One Human with the Logos God remained vague, however at the end of the 20th century the Christian Archimandrite Sophrony (1896-1993) spoke clearly:

According to the ancient theological tradition
of the Eastern Orthodox Church,
mankind is one being
but multi-hypostatic,
just as God is One Being in Three Persons.
(…) When we pray for the entire world,
we are given the capacity to love
humankind which has the same essence as us,
to experience all of humanity as One Human.

And behold, when Sophrony felt complete identification with humanity, he found himself existing in the Logos: When I remain in Him, I can then say “I Am”.

Thus, they who open themselves up to the One Human, find themselves in the Logos. And this unity between Logos and Human, the Human Logos, feels and speaks as the Logos itself, as the “I Am”, as Sophrony confirmed, Sophrony who felt sorrow when he was losing this experience:

“Returning” from the pure prayer
in the thickness of flesh of this world
we lose the experience of the one human
and we see once more with sorrow
that humans are not fully transparent
among each other.

However, if the human being had the capacity – but also the right and the responsibility, in our view – to experience its self as one with humanity and the Word-Logos, and to express its self as the Logos, we see that historically this capacity had remained unfulfilled up until the coming of Ioannis.

Ioannis had to appear in human history after the incarnation of the Word, to show what our likeness to the Logos is and how it is expressed, a likeness preordained for everyone of us, according to John the Evangelist: “we know that, when he shall appear, we shall be like him; for we shall see him as he is” (John 1 3:2).

What had to be underlined in every way possible, what was the essence of Ioannis’ appearance, is that Ioannis did not settle simply with teaching and showing, through his fiery prayers, how the Word is expressed through humans… On the contrary, he showed with all his might that the above are prerequisites for fulfilling the ultimate target: that humans should act through their union with the Logos to change the world.

Therefore, he was the first to liberate from inside us the word of the Word; he liberated the expression of the Logos through humans and began the Work of the restoration of all things, through the highest form of theurgy: the active expression of the Logos’ presence, which then sheds its resurrectionary fire on Earth, intervening in all the things that bind and restrict humans, and shaping new collective experiences in the collective consciousness.

All these take place when the person who blesses deposits responsibly their own self for the realization of those interventions, since assuming responsibility for everything is the only thing that can support the restoration of everything.

This Ioannis incarnated, depositing his own life in the Work of the Logos, in favor of his humanity-self.