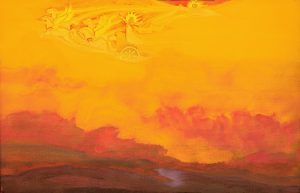 This part of the Human Being was connected with the luminous part of humanity, with the most evolved persons, so that he could express humanity’s affirmation towards the coming of the Logos and welcome him.

He still needed to develop further to connect himself with all human souls, regardless of their evolution. For this to happen, he needed to be penetrated by the love which the Word brought, and to unite himself with elements and qualities of each and every human, so that his union with every soul would be real and experiential.

To this man, the son of Zacharias and Elizabeth, a name was given through intervention from above, a name which did not exist in his family. The relatives disagreed, but his parents agreed: his name would be Ioannis – Yohanan in Hebrew and Ιωάννης in Greek. The name meant God’s (Yah) grace (hana).

Elias, the ancient prophet who had used to divine fire and who death did not claim, he for whom the Logos-Christ announced that he would return before his Second Coming and restore everything, merged with Ioannis, who already possessed the spirit and power of Elias.

This united being, the Forerunner of the Word and the greatest of all humans to have been born until then, Elias-Ioannis, continued to evolve after the incarnation of the Word in order to be fulfilled and fully unify himself with the Wholeness of earthly humanity. It was only natural that this being would express the One Human, when this would reach its likeness to the Word.

Elias was, however, present during the passage of Christ in one more person, who also bore Elias’ spirit, and who also stood before the Word face to face like Ioannis, and was also penetrated up until the core of his being by him, like Ioannis.

He did not only stand before him, but rose with him up to the Golgotha, carrying the Cross of humanity on his back.

This man, Simon of Cyrene, would again return during the time when the One Human would reach likeness with the Word, would merge with Elias-Ioannis in one being, acting as his body in the earthly world. And then he would again carry that same Cross on his back, in accordance to the divine plan.

To begin the rise.