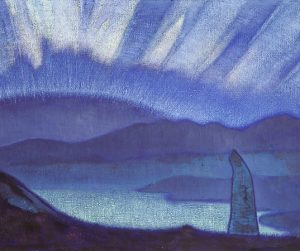 He was Wholeness, one with God and everything that existed in the divine mind, and therefore he could not know himself. This Wholeness was the carrier of God. But he was still in Eden.

He came out. He fractured the unconscious unity of everything, so that he may regain it consciously by becoming complete again. From the Father-Mother, this was spoken:

Gather the fruit of your experience, know yourself, become similar to the Word-Logos and allow his fundamental pulse to live through you in the worlds and in all beings.

Adam followed God’s exhalation and wave of life, and entered the Cosmic Egg.

Even though his unified being was always internally united with the Word, he entered the world of multiplicity and he sank into separated forms, so that interaction and history could begin; so that he could relate to others and build a consciousness regarding itself, God and the world.

He colonized Creation, he interlaced with it, created bodies from its matter and evolved along with it. He reached the furthest point possible and wore around him dense matter, so that he could learn through this way as well.

At the beginning of God’s inhalation, in a world where it was possible for matter and spirit, through their harsh struggle, to reach a harmonious synthesis and integration; at a place where the intensity of opposites – of grandeur and degradation, of light and darkness, of freedom and slavery, of pain and pleasure – was strongest than anywhere else; on a planet where the fall of humans and angels constituted the process of inner unification and theosis harden than in any other place; the Logos was incarnated.

He stopped any further submersion into the Fall;
he received before the Law the burdens of humanity, incarnated through his life and death the love that sacrifices itself for others and introduced it for the first time on Earth, he turned to flow of evolution upwards;
he proclaimed his direct personal relationship with every human soul, regardless of how far from the light it was;
he opened the path for ascendance above the spiritual planes, where only a rare few could reach before his coming through paths that divine emissaries had opened in East and West;
he declared that he was the life and light and path to God, whom he revealed as a loving Father.

In this world where the Word, the archetype of the Human Being, had incarnated, the One Human, Adam, was called to his theosis, his deification, hence to reach likeness to the Word. A likeness which needed to be expressed in the earthly world, to be initiated on Earth and from here be spread to encompass all planes and worlds.

To be like the Word meant that his consciousness within form, matter and time would be so much expanded so that it would embrace his unity with God and with everything;
it would embrace responsibility for everything, and therefore for the deification of humanity, which is its own self;
it would embrace his own infinity and his own godhood within God, and would express those with the same directness that was seen in his Archetype, and thus reveal his likeness.

Human and Logos one, the Human-Logos.

Adam was lactated on the planet of tears; from cross to cross he rose through History up until the highest point he could reach. And at one point, through the most evolved of all of his parts, he stood before the Logos during the baptism in Jordan river.