The Word God became human during its first coming, and therefore both a man and a woman. 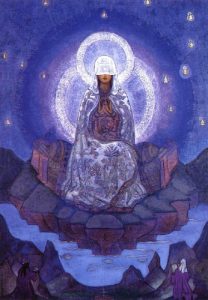 His public appearance, however, took place only through the male body, that of the Son; the Mother remained hidden, due to the domination of patriarchy

Therefore it has been necessary at the present time to liberate the human consciousness from the limited perception of God being only male, in order to lead to the human being’s harmonious unification. For this to happen, the Word-Logos must appear from within a woman as well.

So, in the same year (1981), the one chosen to first express the Mother Logos, to restore the spiritual equality of men and women, and thus the human consciousness, and to work together with Ioannis in the struggle for the liberation of humanity, Anastasia, came next to him.

She was only 18 years old when, teaching directly from her union with God, her cooperation with John began. And then, the Mother started to appear as God herself.

In this way, the new era of apprenticeship in the new cosmic period began.