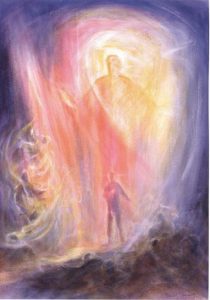 The students gathered, and the Teacher came.

– So, how are you faring with my Work?

– Teacher, we work through introspection to transubstantiate our hard parts, to love all of the qualities of the human being, to experience humanity as our self; we try to become ever more better in handling spiritual energies, we try to express the Word, they said excitedly.

– Why are you doing all these?

– To become one with Christ, to help humanity, to reveal the Logos Son Mother and the Human Logos-Christ, to realize the divine plan!

– Well, of course this Work is that of the consciousness, and the human consciousness needs to reach the stage where it vibrates in the experiential unity with everything, the identification of humans with the Logos, with other humans, with the Cosmos. But humans and the Cosmos came into being through the pulse of the Word-Logos and they cannot find again their unity without this pulse. Therefore, self-knowledge, introspection, the struggle to unify internally humanity in your mind, in your heart and in your consciousness should be attempted with this pulse, and the handling of spiritual energies too, otherwise how does this Work, which is based in the union with the Logos and where everything takes place through this union, differ from the professionals of self-knowledge and those who ground high energies in different ways? In the beginning was the Word, shouldn’t therefore always the beginning be the Word and its pulse?

– What do you say about Ioannis?

– The fiery Teacher, the fiery theurgist, he who presented the Human Word, he who sacrificed himself for humanity, who offered to everyone his self.

– Fiery teachers and theurgists there have been many, and many sacrificed themselves for humanity and offered themselves and, I truly say, o human, you should honor them throughout eternity… Ioannis, however, managed to present the Human Word and to assume the inner and outer restoration of all things, because he was the first to release the pulse of the Word through humans, and with this pulse he taught, he blessed, he expressed the highest theurgy, and with this pulse, who brought into existence the Human Being and the Cosmos, he began the reestablishment of the Cosmos and of the human being. In this pulse, which stems from the fire of the one Being and of the one Life lives Ioannis, around him and over him and through this pulse the teaching flows, the Work is being constituted, and the Logos is being manifested.

This is how Ioannis and the Mother embrace, and this embrace, this pain and this desire to liberate everything, those liberate in you the prime pulse.

The students bowed their heads and said: o Teacher of love, give us this pulse throughout eternity. The Teacher said:

– Did I ever point you towards the unilateral preoccupation with self-knowledge or the systematic unilateral study of how to bless? Could it be that because I urged some of you to constitute those things clear, you maybe understood that I expected from you to become professionals of introspection or experts in blessing? I tell you that you may become very good in one or the other, but neither those, neither christofication itself, is your final goal. You goal is to become humble servants of humanity through the pulse of the Logos.

And the Teacher spoke again and said:

– Be careful, my beloved, of superiority, because it is being fed by beautiful prayers and theurgies, by insinuations regarding an advanced self-knowledge and by the demonstration of your knowledge, by good deeds and by false humility. But you should strive to be simple, to be aware than in reality you know nothing, to pray to the Father to honor you into doing whatever you can for humanity, and to live through the pulse of the Word.

Thus did the Teacher end his words, and the student awoke shaken. He started to wonder through the night if he felt superior than other humans, if he knew what real love is, if he was more concerned with humanity than with the spiritual self-image that he had been building for so many years…

Somewhere far, it dawned; for some reason, the image of the Teacher came in his mind, praying on his knees with fiery words and opening up the sky. Time entered through the cracks and was dissolved in a thick immobility; he tried to pray but in vain. “Teacher”, he said in the end, in a hushed voice, “truly I know nothing”.

“Nothing”, he repeated loudly. And it was the most liberating prayer he had ever done.