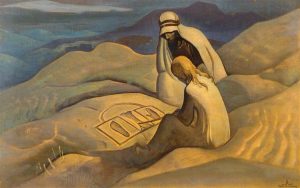 On Palm Sunday of 1995, Ioannis left his material form. He was assimilated fully into the Word-Logos and his presence was diffused inside every human being.

In 2006, after a period of preparation, Ioannis – in absolute union with the Mother and therefore with Anastasia – initiated a grand phase in the work for the restoration of all things.

In this phase, the three heading members of the planetary Hierarchy of Light, of this greatly evolved part of humanity, one of whom had already cooperated with Ioannis in the first stages of this Work, joined in the struggle with all powers they could muster, under the guidance of Ioannis and of the Mother.

Throughout this period, Anastasia is cooperating with those three brothers, spiritually performing along with them restorations which take place for the time in the history of the planet.

This struggle is still in progress; the Work of the Second Coming, multi-faceted and unpredictable, will keep on until everybody on this planet is one with Christ.

The Human Logos is awakening. The Mother is on the front line and is sacrificing herself. The dawn is coming.